The French singer Charles Aznavour – often hailed as his country’s Frank Sinatra – has died at the age of 94.

Aznavour, who was born Shahnour Varinag Aznavourian in Paris to Armenian parents, sold more than 100m records in 80 countries and had about 1,400 songs to his name, including 1,300 he wrote himself. He was sometimes described as the French Sinatra because of his stirring, melancholic style.

His singing career was forged in occupied Paris during the second world war, performing in cabarets as his parents secretly worked with the resistance, hiding Jews, communists and others in their apartment. “French is my working language but my family language is always Armenian,” he said in 2017.

Aznavour opened for Édith Piaf at the Moulin Rouge and the popular singer was an early adviser – and flatmate. “I brought her my youth, my madness; she loved my whole jazzy side,” he told the Guardian in 2015. She advised him to have a nose job, only to declare, “I preferred you before” after the surgery.

He is one of the most celebrated exponents of the French “chanson” form – easy-listening songs with vivid lyrics, rich in storytelling, emotion and humour. One early song, 1955’s Après l’Amour, was banned on French radio for its depiction of a couple basking in post-coital happiness. 1972’s What Makes a Man, meanwhile, is sung in the persona of a gay man who faces down homophobia to declare: “Nobody has the right to be / The judge of what is right for me.” He became perhaps best known for his gloomier numbers – the director Jean Cocteau once quipped: “Before Aznavour, despair was unpopular.”

His biggest hit in English was She, a 1974 romantic ballad in which Aznavour confronts the equal joy and strife in a relationship, nevertheless declaring “the meaning of my life is she”. It spent four weeks at No 1 in the UK singles chart, and was also recorded in French, German, Italian and Spanish. The song got a second lease of life when it was covered by Elvis Costello for the soundtrack to the 1999 film Notting Hill, reaching No 19 in the UK. Aznavour’s only other solo hit in the UK was with The Old Fashioned Way, which reached the top 40 in 1973.

Over the years he recorded duets with the likes of Sinatra, Elton John, Céline Dion, Bryan Ferry and Sting, as well as the classical tenors Luciano Pavarotti and Plácido Domingo. In 2010, he recorded Un Geste pour Haiti Chérie, a song with young French rap stars, to help raise money after that year’s devastating earthquake in Haiti. 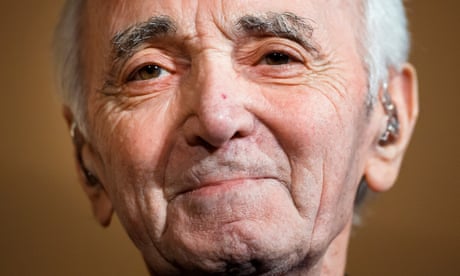 Another singing partner was Liza Minnelli, with whom he also had a brief love affair, telling the Telegraph in 2014: “She learned from me. She says that herself – or else I would have shut my mouth!”

The French president, Emmanuel Macron, tweeted: “Charles Aznavour was profoundly French, deeply attached to his Armenian roots and known throughout the world. He has accompanied the joys and pain of three generations. His masterpieces, the tone of his voice, his unique radiance will long survive him.”

In a second tweet, Macron said he had invited Aznavour to sing at the Francophonie Summit, on 11-12 October in the Armenian capital, Yerevan.

“We share with the Armenian people the mourning of the French people,” the president added.

Renaud Muselier, the president of the Provence region of south-east France where Aznavour was living at the time he died, said: “French culture has lost one if its greatest. He has left us a priceless body of work rich with more than 1,200 songs. A generous and charismatic singer, he leaves an immense emptiness.”

France TV described him as the “last giant of French song” and said his death had left it “orphaned by its doyen and most illustrious ambassador”.

The former French president François Hollande tweeted: “Charles Aznavour has just said adieu, but for us he will always be on stage.”

Anne Hidalgo, the mayor of Paris, tweeted that Aznavour was “A Parisien who became a true icon of French song and a passionate ambassador for Armenia around the world.”

At the unveiling of Aznavour’s star on the Hollywood walk of fame in 2017, director Peter Bogdanovich said: “Sinatra once said every song is a one-act play with one character and Charles is an extraordinary actor as well as an extraordinary singer.”

Aznavour’s last interview was broadcast on French television on Friday evening. In it he said he “would die” if he could no longer work.

“Me, I cannot not live and I live on stage. I’m happy on stage and that’s obvious,” he said. He added: “My sister and I decided we’re going to pass 100 years. It’s on record. She doesn’t have the right to go back on it and neither do I.”

… we have a small favour to ask. More people are reading the Guardian than ever but advertising revenues across the media are falling fast. And unlike many news organisations, we haven’t put up a paywall – we want to keep our journalism as open as we can. So you can see why we need to ask for your help. The Guardian’s independent, investigative journalism takes a lot of time, money and hard work to produce. But we do it because we believe our perspective matters – because it might well be your perspective, too.

The Guardian is editorially independent, meaning we set our own agenda. Our journalism is free from commercial bias and not influenced by billionaire owners, politicians or shareholders. No one edits our Editor. No one steers our opinion. This is important because it enables us to give a voice to the voiceless, challenge the powerful and hold them to account. It’s what makes us different to so many others in the media, at a time when factual, honest reporting is critical.

If everyone who reads our reporting, who likes it, helps to support it, our future would be much more secure. For as little as €1, you can support the Guardian – and it only takes a minute. Thank you.

Dear Compatriots,
We hereby inform you that due to the wide circulating of coronavirus (Covid-19), the 2020 conference of the ”New Armenia, New Diaspora” scheduled for May 23, 24 in Cologne, Germany, is being postponed to a later undecided date. We will use the time to be more organized and ready to implement the program in the shortest possible time.>>>>>